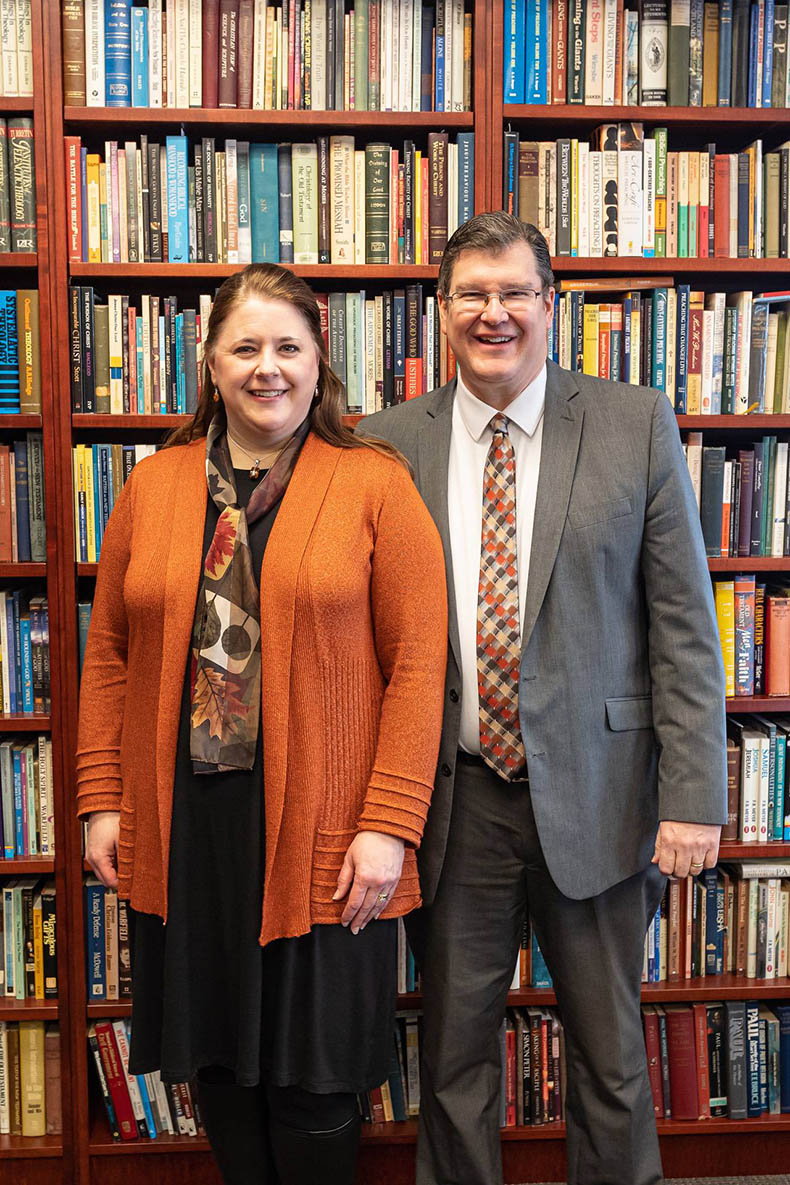 IN THE PROVIDENCE OF GOD, I was born into a strong Christian home in Frederick, MD. Shortly after I was born, my dad felt called of God to the mission field. After several years of college preparation, we traveled halfway around the world to serve as missionaries in Papua New Guinea. It was while I was in this foreign land that I was saved at the age of nine after a Sunday evening service. At the age of 16, I felt God’s call to preach. After graduating from Frederick Christian Academy in 1985, I attended Bob Jones University and graduated in 1989 with a B.A. degree in Christian Missions. I continued my studies with an M.A. degree in Bible in 1991. A week after graduation, I married the love of my life, Christine Gerard. We returned to Greenville, SC, where I served as part-time youth pastor in Spartanburg, SC. I finally finished my seminary education, graduating with an M.Div. degree in 1994. That summer my wife and I returned to our home church, People’s Baptist in Frederick, MD. There I served as the assistant pastor and taught in the high school at FCA. During my six years of ministry there, the Lord blessed us with three children, Andrew, Abigail, and Tabitha. It was also at People’s Baptist Church that I was ordained to the gospel ministry in 1998. On November 1, 2000, I began my pastorate at Calvary Baptist Church. The people have been a wonderful blessing to my family and me. 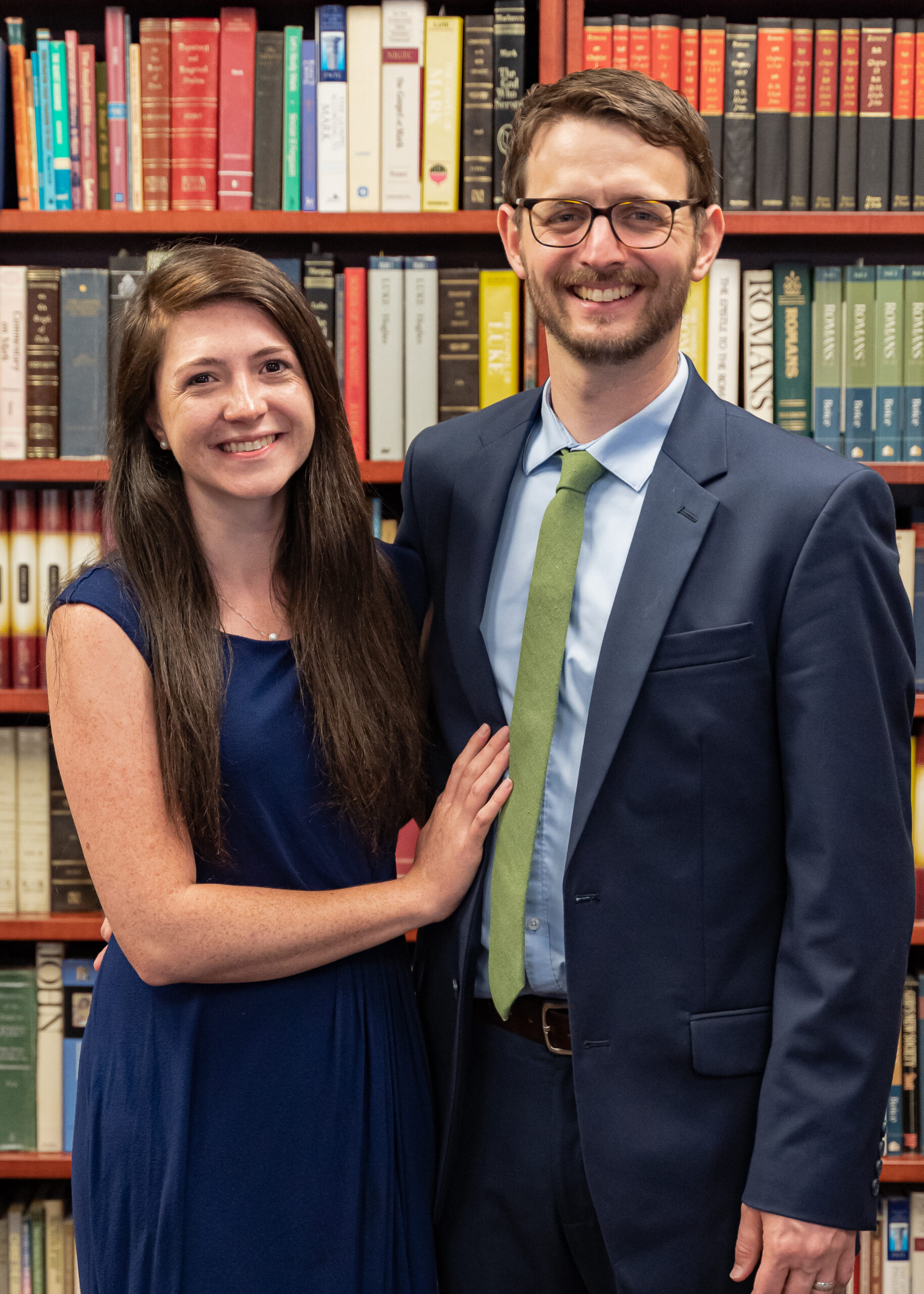 THE LORD HAS BEEN VERY GRACIOUS TO ME. After He drew my mother to Himself when I was very young, I was blessed to grow up in a Christian home. Although I made a profession of faith at the age of six, I continued to live for myself, and struggled with rebellion and strong desire for my own way. I realized when I was twelve years old that I could not change myself, and if I were to be rid of my sins, I would need to ask Jesus to deal with them. I did so, and the Lord mercifully began changing me. His work in my life accelerated when our family moved to Calvary Baptist Church in the summer of 2004. In the youth group here at Calvary I deepened my relationship with the Lord and felt the Lord call me to preach. In the fall of 2006, I enrolled at Bob Jones University and graduated with a B.A. in Bible in 2010. It was during my undergrad degree that I was scripturally baptized here at Calvary. Afterward, I pursued and graduated with a Master of Arts degree from BJU in 2012 and a Master of Divinity in 2018. During my school years, the Lord allowed me to travel to a number of fields overseas, primarily in southern and southeast Asia, including teaching for one school year at an overseas seminary. From 2016 to 2018, I worked on staff in the Center for Global Opportunities at Bob Jones University as the Coordinator of Outreach & Evangelism, a wonderful job that helped prepare me for my current role. I came onto the pastoral staff at Calvary in June, 2018. In July, 2022, the Lord allowed me to marry my incredible wife, Karina, who is both my helper and my treasure. 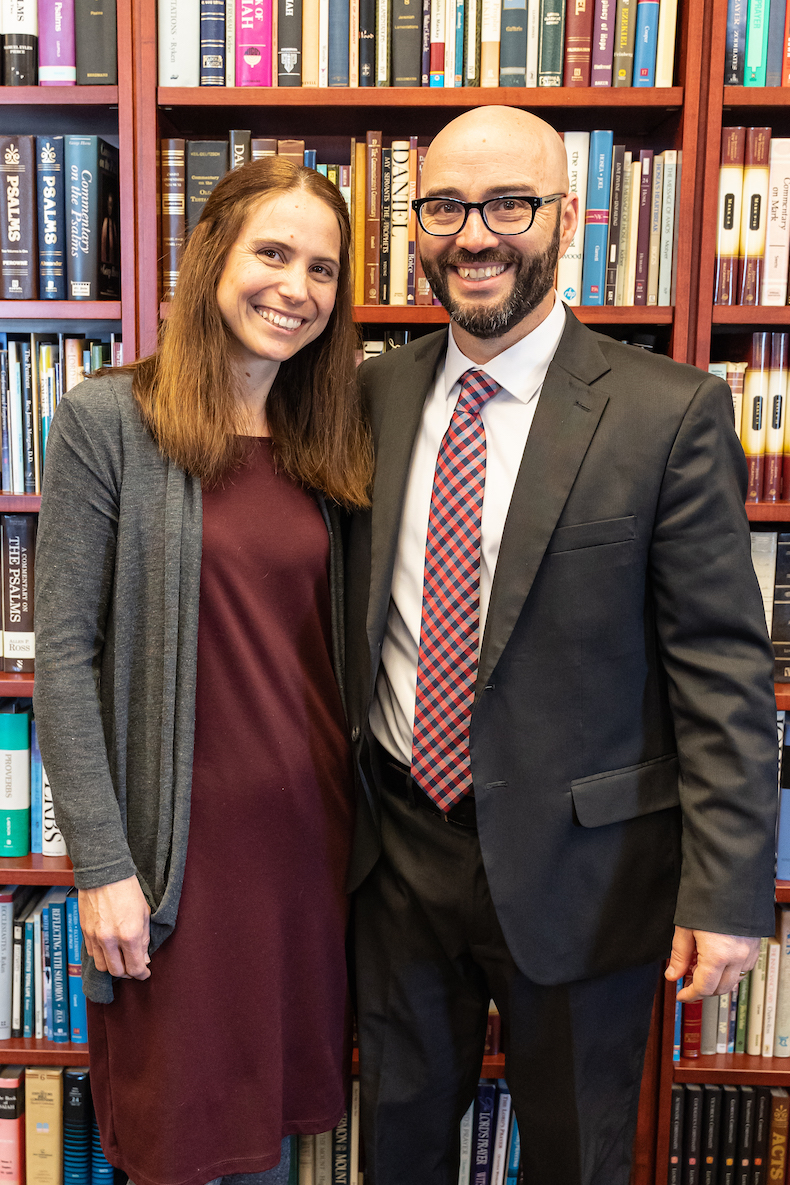 I REJOICE THAT BY GOD’S GRACE I WAS RAISED IN A CHRISTIAN HOME where the Bible was not only taught faithfully but lived obediently by my parents. Through their faithful instruction and the faithful preaching of our pastor, I came to realize that I was a rebel who had sinned against a loving but righteous God. I saw that I could never live up to His holy standard and that I needed to trust in Jesus and His death on the cross as the substitute for my sins. As a young child, I repented and trusted in Christ and began to follow Him as my Lord and Savior. In 1985, my family moved to Maryland and we began to attend Calvary Baptist Church. It was here that I was baptized, that I surrendered to the Lord’s call on my life to be a pastor, and that I met and later married my wife Nicole (Dean) Shipe. We both studied at Pensacola Christian college, graduating in 1999. I continued my education at Pensacola Theological Seminary graduating in 2001 with an M.A. in Biblical Exposition. From 2001 to 2003 I served as a youth pastor at Pensacola Baptist Temple, then in the fall of 2003 we returned to Maryland and Calvary Baptist Church where God graciously allowed me to serve as assistant pastor until 2008.

In 2009, we surrendered to the Lord’s direction to go to Tanzania, East Africa where we were blessed to serve as church planting missionaries with GFF until 2021. Nicole and I are so thankful to God for the privilege of raising our 7 children (Colten, Anna, Ben, Alyssa, Erin, Eden, and Hudson) in Tanzania, where we were able to make so many wonderful Tanzanian friends, experience God’s power and protection, and learn to live as pilgrims in a foreign land. We rejoice again at God’s awesome providence that allowed us to return to Calvary Baptist Church in December of 2021 so that I could serve as Pastor of Family Discipleship.

Psalm 5:11 “But let all those that put their trust in thee rejoice: let them ever shout for joy, because thou defendest them: let them also that love thy name be joyful in thee. 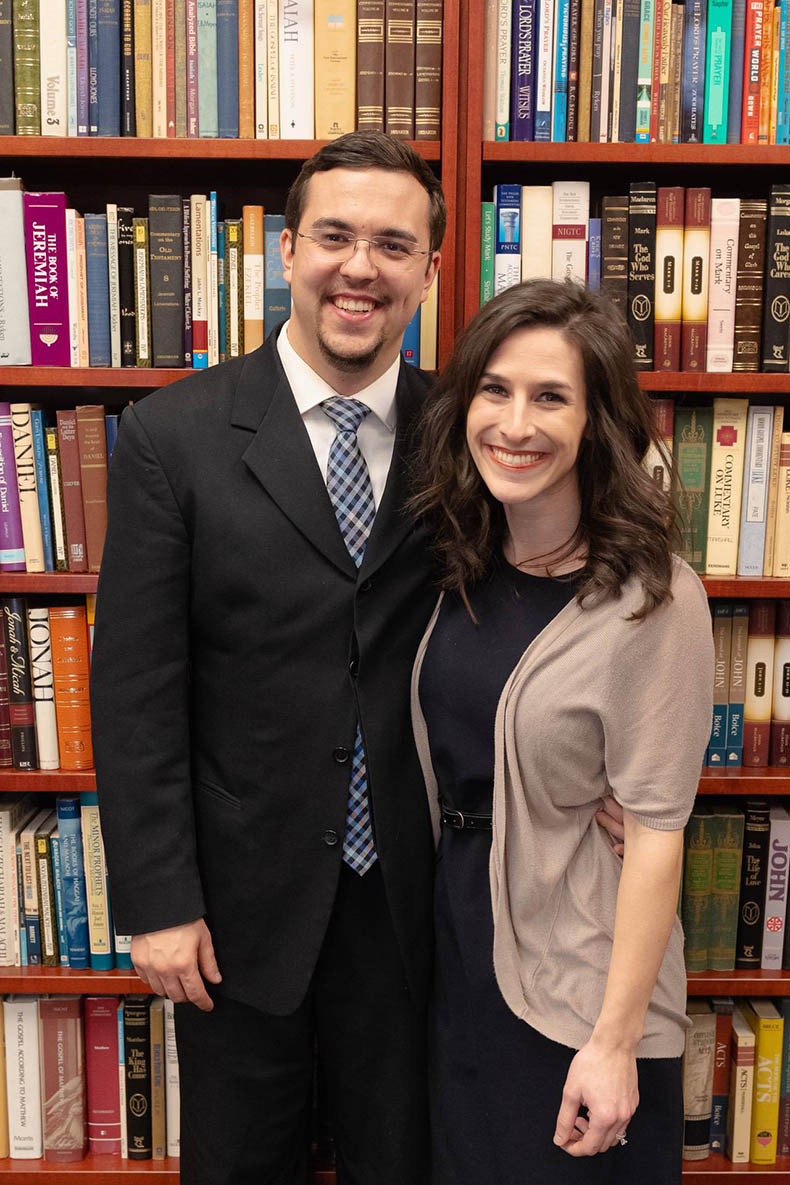 BY GOD’S GRACE I WAS BORN INTO A CHRISTIAN HOME and heard the gospel from an early age. I first came to the Lord for salvation at the age of 5, and a few years later gave public testimony in baptism of my faith in Christ. However, in the following years, I wrestled greatly with sin and with doubts about whether or not I had been born again. The Lord brought me into a time of utter desperation and despair from which I looked to His crucified Son, the One who bore in His body all my sin, and the only One who is able to save me. At an early age I knew the Lord wanted me to serve him in the ministry. He lead me to Bob Jones University where he equipped me with a BA in Church Music and a MA in Theological Studies. During that time the Lord confirmed His calling to the ministry through multiple internships at my local church. I was later given the privilege of serving as a mentor to undergraduate students at BJU, which helped prepare me to serve as a youth pastor. I have been serving as Pastor of Youth and Music at Calvary Baptist Church since February, 2020.

Before I formed thee in the belly I knew thee; and before thou camest forth out of the womb I sanctified thee, and I ordained thee a prophet unto the nations. (Jeremiah 1:5 KJV) 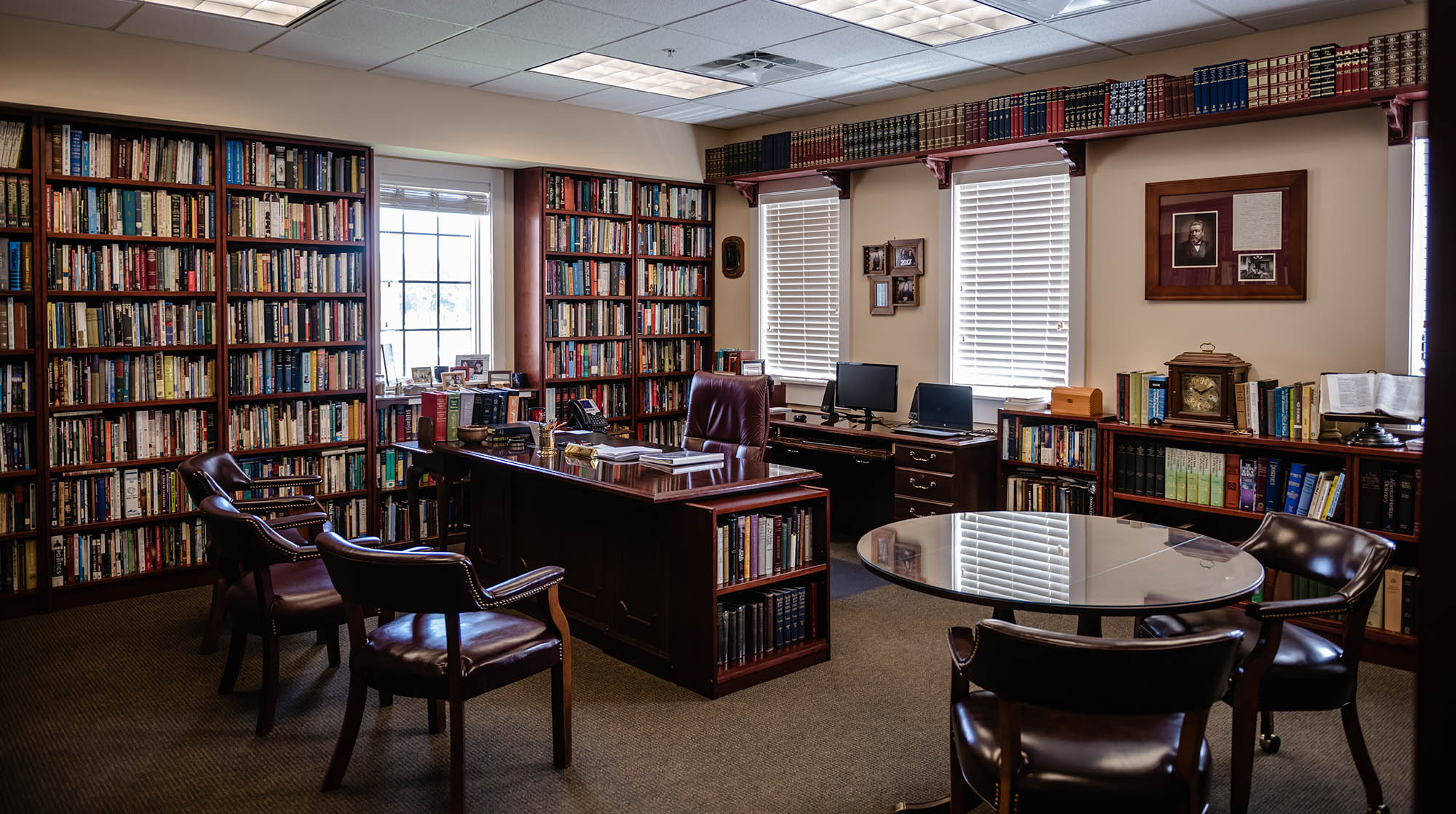